Blackstone Part I
This game is no longer available to purchase 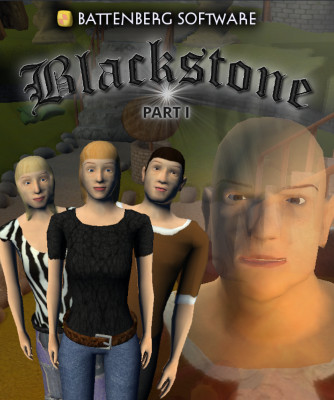 Blackstone Part I is the first in a trilogy of adventure games in which you take on the role of our heroine Kate, the innocent and unknowing victim of an evil sorcerer's attempt to harness the powers of the mysterious Blackstone. As she embarks on a brave mission to save her village and help her friends, her quest soon leads her to the Clouded Mountain where she must discover both the true extent of her task and the real reason Blackstone is so desperately coveted.
You control Kate as she starts in her home village and then moves through the different areas of the game. You must help her find, pick up and use items, solve puzzles and meet lots of new faces on her journey. The story unfolds as you progress in the game, and is shown via multiple cut sequences in fantastic 3D with full character voiceovers.
Blackstone was available for the Xbox 360 and was released in July 2011. It remained there until the marketplace closed in October 2017, and is no longer available on any platform.
Here is a video trailer and some screenshots from the game. Click on the screenshots to view larger versions. You can also download the soundtrack to the game for free here.
Walkthrough
Below is a complete walkthrough for Blackstone Part I. It describes the quickest way to get through the game by indicating where to go, which items to pick up and which items to use. The game begins with Kate regaining consciousness in her own village after Ebenezer and his assistant Nathaniel steal the mysterious Blackstone. It soon becomes apparent that their intention was to empty the village of everyone, and that leaving Kate behind was a mistake. Rose, a friend of Kate who was successfully captured and imprisoned learns this, and pins her hopes on Kate rescuing her.

Part One - Kate's Village
There are three houses in the first area of Kate's village - her own, Rose's house and an empty house. You only need to go to Kate's own house, so do this first. Kate's house is the one around the corner to the right from where you start, and by going here Kate picks up some coins she left behind. Next go out of the village (take the path next to Kate's house) and you'll appear in the second area, outside a shop. Walk up to the shop door and attempt to open the door. You'll have to solve a puzzle before it unlocks which involves rotating a series of pipes so they form a complete circuit (i.e. there aren't any pipes left that aren't joined to anything). The best technique here is to go around the corners and edges first - no pipes can be pointing outside the grid so there aren't as many possible ways for these pipes to be orientated.
Once you've solved the puzzle, the door will open, and you will find a rucksack. Kate says she doesn't feel right just taking it, so use the coins and she will trade them for the rucksack. Having picked up the rucksack, you can now carry more items. Continue to the left and when you reach the bottom of the steps, pick up the matches that are lying on the ground. Don't go up the steps just yet, for now move left again to the next part of the village.
As soon as you get to the next area, there is another building with another door that you must solve another puzzle to open. This puzzle involves rotating sections of 6 marbles at once in a grid, with the aim to get all the red marbles to the outside of the grid and all the yellow ones in the centre. The best thing to do here is to aim for the red ones first by doing each of the 6 "corners" one by one. Once you've solved the puzzle, Kate will enter the house and find a letter, apparently from Rose that says everyone is trapped at the Clouded Mountain. It is at this point that Kate knows what she must do - get to the mountain to help rescue Rose and her fellow villagers.
Continue to the left, and in a small alcove you will find an axe on the ground. Pick up the axe, continue following the path round and you will also find a key on the ground. Pick this up too. The axe is used later in the game, but the key can be used now, and to do so you must return to the second area of the village where you opened the shop door and found the matches.