Planet Pinball
This game is no longer available to purchase 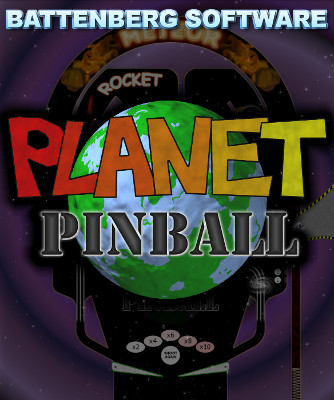 Planet Pinball is a space-themed pinball simulator in which you must aim for the highest score you possibly can with 5 balls. The controls are simple - you keep the ball in play with the left and right flippers (using the left and right shoulder buttons on your Xbox 360 controller) and can "tilt" the table left or right (X or B buttons respectively) to give the ball a nudge in the right direction. Be careful when tilting though as two successive tilts will tilt the entire table and cause you to lose your current ball.
There are loads of ways of scoring points in the game - combinations of loops, ramps and targets will amount to big scores if shot at the right time. Can you accumulate the 500,000,000 points needed to top the high score chart? It can be done!
Planet Pinball was released for the Xbox 360 via Xbox Live Indie Games in December 2009, and remained on the Xbox Live Indie Games marketplace until it closed in October 2017. The game is no longer available for purchase, but if you purchased it when it was available, you can still download it.
Here are some screenshots from the game. Click on them to view larger versions. You can also download the soundtrack to the game for free here.
Planet Pinball A-Z
Not sure exactly how the Planet Pinball table works? Want some secrets to getting a super high score? Read on for our dictionary of pinballing terms that will have you hitting the hundred millions in no time!

AIRLOCK
Normally, the Airlock awards a bonus depending on how many times the ball has hit walls and bumpers, which starts off at 100,000 and can easily push 300,000-400,000 on a decent ball. When all the PLANET PINBALL LETTERS have been lit, a bonus is awarded in the airlock which goes up in the following way:


When all these have been collected, they go back round to the start again. The airlock is also the place to collect the JACKPOT when it is lit.
BLACK HOLE
When the Black Hole is open, shooting the ball into the ROCKET will send the ball down the right, rather than left channel and into the Black Hole. This is achieved by lighting the Black Hole letters by repeatedly shooting the LEFT METEOR.
DISTANCE BONUS
The distance bonus is awarded at the end of every ball and depends on the amount of distance the current ball has travelled. This can be multiplied by collecting DISTANCE BONUS MULTIPLIERS (by shooting STAR then the RIGHT METEOR) and DOUBLE BONUS (by shooting 15 ORBITS, then the ROCKET).
DISTANCE BONUS MULTIPLIERS
These are lit by shooting STAR in the ROCKET, and are then collected by shooting the RIGHT METEOR. The multiplier increases by two each time it is hit up to a maximum of x10 (so x2, x4, x6, x8, x10), after which 10,000,000 is awarded for lighting STAR and shooting the RIGHT METEOR. The multiplier resets when a ball is lost.
DOUBLE BONUS
Double Bonus is lit for hitting 15 ORBITS, and then every 10 thereafter, and is collected by shooting the ROCKET. The bonus can be doubled as many times as you like on the current ball, but resets when the ball is lost. It differs from the DISTANCE BONUS MULTIPLIERS in that is doubles the total bonus, including any bonus session points. This can lead to some seriously high scores!
EARTH BUMPERS
These are located inside the ORBIT and score a number of points that increases each time one is hit. These count as targets during a PLANET BONUS SESSION, and hitting 50 targets is required to light the "A" in PLANET.
EXTRA BALL
A maximum of one extra ball can be collected during a game of Planet Pinball, and this is achieved by shooting 10 ORBITS, then shooting the ROCKET before the ball is lost.
JACKPOT
The jackpot is worth 20,000,000 and is collected in the airlock when it is lit. This occurs during the PLANET BONUS SESSION, during the MOON SHOT BONUS SESSION, and after collecting the fourth AIRLOCK prize (for 15 seconds).
LEFT METEOR
The Left Meteor lights the letters of BLACK HOLE. It is also the place to collect the letter "N" in PLANET when shot twice in quick succession, and the place to collect the METEOR BONUS when it has been started in the AIRLOCK.
METEOR
The outer loop that can be shot from either the left or right. See LEFT METEOR and RIGHT METEOR for more details.
METEOR BONUS
The METEOR BONUS is the second prize in the AIRLOCK via the PLANET PINBALL letters. The bonus starts off at 15,000,000 and decreases as time goes by until it is collected, by shooting the LEFT METEOR, or it ends up at zero, in which case you get absolutely nothing!
MOON SHOT BONUS SESSION
This is the sixth and final prize awarded in the AIRLOCK via the PLANET PINBALL letters. During this bonus session, all ramps and locks score 5,000,000 points (increasing by 2,500,000 points each time it is started), and the JACKPOT is lit in the AIRLOCK. You have 50 seconds to shoot as many ramps and locks as you can, and your bonus is awarded at the end of the ball.
ORBIT
The Orbit is on the right, just inside the RIGHT METEOR ramp. It provides access to the EARTH BUMPERS and awards one Orbit, each of which give you 100,000 points in your bonus at the end of each ball. Gaining multiples of 5 Orbits lights prizes in the ROCKET, namely 5,000,000 (for 5 Orbits), an EXTRA BALL (for 10), DOUBLE BONUS (for 15), then alternating between a rising number of millions and DOUBLE BONUS again for every 5. Shooting the Orbit twice in quick succession awards the "L" in PLANET.
PLANET BONUS SESSION
The Planet Bonus Session begins when all the letters of PLANET are lit, and awards 500,000 points (rising by 250,000 every time it is started) for every target that is lit. Targets include the EARTH BUMPERS, the PLANET PINBALL LETTERS and the bumpers above the flippers at the bottom. The JACKPOT is lit in the AIRLOCK during this bonus session.
PLANET
The letters of PLANET must all be lit to start the PLANET BONUS SESSION. They are lit individually, in the following ways:


PLANET PINBALL LETTERS
These letters are shown as targets around the bottom half of the table. When they are all lit, a prize is awarded in the AIRLOCK (see the AIRLOCK section for details). They also award the "E" in PLANET (see the PLANET section for more details).
RIGHT METEOR
The Right Meteor awards DISTANCE BONUS MULTIPLIERS, lit by hitting STAR in the ROCKET, or 10,000,000 points once all the DISTANCE BONUS MULTIPLIERS have been awarded. It also awards the "T" in PLANET if shot twice in quick succession. Otherwise, it scores 250,000 points.
ROCKET
The Rocket provides access to the STAR letters and the BLACK HOLE, if it is open. It is also the place to collect any prizes lit from collecting ORBITS, and the letter "P" in PLANET if shot twice in quick succession. The Rocket scores 50,000 the first time it is hit, and 50,000 is added onto this each time for the current ball, resetting when the ball is lost.
STAR
The STAR letters are accessible by shooting the ROCKET, and which ones are lit can be rotated using the flippers. Hit STAR to light a DISTANCE BONUS MULTIPLIERS (or 10,000,000 if all DISTANCE BONUS MULTIPLIERS have been awarded) in the RIGHT METEOR.
TILT
You can tilt the table by pressing the X (left) or B (right) buttons to prevent losing the ball if you're quick enough. Be careful though - too many tilts will result in the table itself tilting, and the ball will be lost.