Blog 12 - User-Generated Content and Level Editors
When we released The Penguin Factory in June 2019, we included a free level editor bundled with the game to allow players to design and share their own levels. We did this for two reasons: firstly because the rules of the game are simple enough and the number of level objects few enough to make an editor easy to use, and secondly because we'd promised it in Steam Greenlight so we thought we'd better deliver! Admittedly the latter reason came about because we didn't fully appreciate the development consequences when we decided to advertise the game as having an editor, but having done the hard work, it now feels worth it.
Puzzle Games
By far the easiest genre of games to open up level design for is puzzle games. Puzzlers tend to have more definitive layouts - e.g. either there is a wall there or there isn't, and if it's not a wall it has to be one of these other handful of pre-set items. The Penguin Factory is no exception - there are only eight different objects in the game and they are placed at specific positions in a 3D grid such that they don't overlap.
Fortunately here at Battenberg Software we aren't short of puzzle games. As well as The Penguin Factory we've recently released Square Route and The Food Run, which have similar grid-style levels that would suit a level editor well. In the future we intend to release level editors for these games to allow players to share their creations.
Fit for Release?
The above list of puzzle games have a combined total of 284 levels, all of which we had to design. How did we do this? Using level editors of course! For each of these games we designed a basic level editor we could use ourselves to design the game levels. Whereas The Penguin Factory's level editor was released to the gaming public, the level editors for Square Route and The Food Run have not been so far. Converting what we used to create levels for those games into something suitable for release, as we found out with The Penguin Factory, is not a simple task. 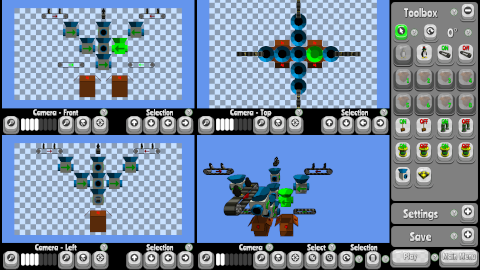 The level editor in The Penguin Factory


To get The Penguin Factory's level editor from a state that allowed us to develop the game's levels into something fit for release, we found we had to:
We've had limited interest in The Penguin Factory's level editor so far, but we're hoping for more when the game is released on Microsoft Store (two weeks away at time of writing). It really will be fascinating to see whether players can come up with ideas for levels that during development of the game we never even thought of. That reason alone is enough for us to start considering including level editors in future releases - of puzzle games at least.